I’ve been to Kyoto a few times but never once did I have the intention to visit Nara. I am not sure why thou.  So this round, I decided to pay Nara a visit and how I have missed so much these past years!

Still sleepy from our overnight flight from KL to Osaka on Air Asia, we came out of the airport not decided on where to go. Straight to Kyoto? or to Nara first? Before we came, we had booked via online the Icoca card for travel from Osaka airport to Kyoto. Since this pass was only reserved but not paid, we decided to check out the bus timing for Nara first. It will depart in 5 minutes! Ok, Nara it shall be and we ran to the boarding berth and bought the bus ticket at the ticket counter.

It was a nice bus ride of about 1hour+ and we alighted at the Nara Kintetsu train station. We went down to the locker area in the train station and deposited our bags there. Our 2 cabin luggages fit nicely in a medium-size locker for ¥500 and off we go to explore Nara.

Nara Park is a large compound with many historical sites registered on the UNESCO’s World Heritage List and it is home to hundreds or thousands of  freely roaming deer.

Founded in the 8th century, it houses the massive Great Buddha statue (Vairocana statue) in its Daibutsuden Hall. The hall was burned down twice and the present structure which was rebuilt in 1709 was actually a scaled down version of two-third from the original version. 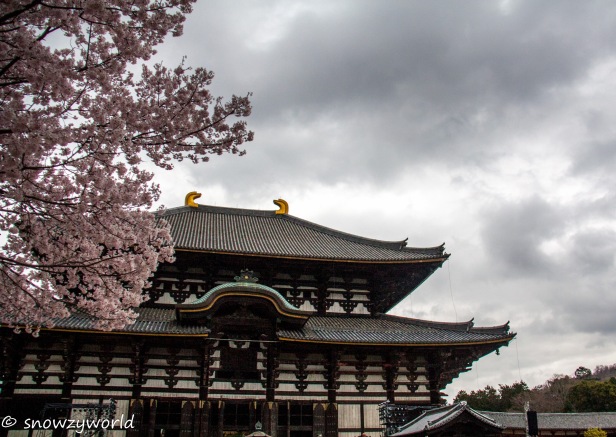 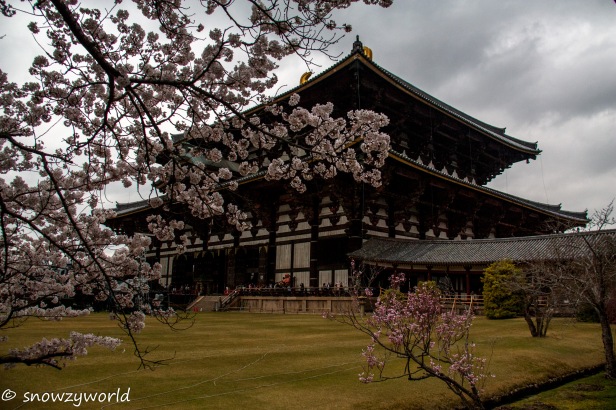 Characterized by foot paths towards the Shrine with approximate 2,000 stone lanterns and the eaves of the shrine are decorated with a thousand hanging bronze lanterns.

Kasuga Taisha Shrine was founded as a family shrine for the Fujiwaras, a dominant aristocrat clan in the 8th century. A legend has it that the Fujiwaras invited a mighty god from Kashima Shrine (in present day Ibaraki Prefeture). The god is said to have come to Nara riding on a white deer. Since than, deer have been respected and protected as divine messengers by the local people. However after WWII, the deer are no longer considered sacred or divine but was designated as national treasures and is protected as such.

The Deer at Nara

When you are in Nara, you will be surprised by the abundant of deer roaming freeing in the city. They are everywhere! Although they feed on grass bamboo leaves and buds, one can buy the Shika Senbei (deer crackers) at several spots in the park and feed them. Some people said that they are polite to the point that they will bow to you when they wanted a Shika Senbei from you! I do see some deer coming over and nudge at you for food. If you do not have any, they will usually walk away.

Do note that some of them may turn aggressive if provoked. Signage are placed to teach tourist the proper way of feeding they the senbei as they are still wild animals and should not be teased when being fed.

Do not leave Nara without trying their specialty here.  Kakinoha-zushi, a type of sushi invented around the Edo period. These sushi uses mackerel fish preserved in salt instead of fresh fish as the prefecture is not near to the sea and thus making it difficult to enjoy fresh fish. The preserved fish is stored together with rice to keep the flavor from becoming too salty and is wrap in persimmon leaves which is said to have antibacterial properties.

I had my fill of this delicacy at Izasa which is famous for its Kakinoha-zushi. Do pick a seat overlooking the Todaji Temple!